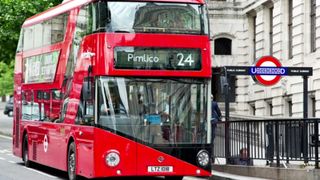 Apple Pay in the UK

You might have heard that if you're using Apple Pay on London's public transport system you may be liable to a fine - even though you've paid to use the service.

TfL and Apple have both confirmed that's not the case, and that ticket inspectors are able to scan the NFC chip on your iPhone or Apple Watch to check a payment has gone through.

The understanding was that, if you've used Apple Pay or another contactless service, there isn't a number for the inspector to check, meaning you'd be liable to pay a penalty fare as you can't prove you've paid to use the service.

However that's not true: when ticket inspectors board public transport they can scan your Oyster card or see a contactless card payment number on a receipt.

A spokesperson for Transport for London said, "The readers ticket inspectors are issued with do recognise Apple Pay in the same way as they recognise contactless payment cards.

"Apple Pay customers should activate the payment app before touching their device on the portable reader for inspection."

Expert Reviews spoke to a ticket inspector on a London bus service this weekend, who claimed there was no system in place.

It does further confirm there needs to be more training for employees who interact with Apple Pay and other contactless payment systems. We've found a lot of confusion around the launch of the new service with retail employees not even knowing the service existed or had launched in the UK.

The original problem of your iPhone or Apple Watch dying mid-journey on the tube is still an issue though – neither TfL nor Apple haven't managed to solve it yet and both have gone quiet on the issue.