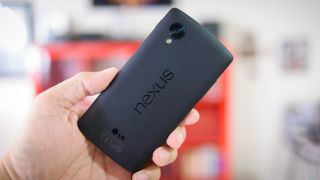 Most of us have been pretty happy with LG's efforts in producing Google's Nexus smartphones, but that partnership may be over. A new Nexus may still appear later in the year but don't expect it to come embellished with LG's logo.

According to LG Communications Director Ken Hong, with less than six months to go until the phone's expected arrival, Google hasn't approached him for a Nexus 6.

"Normally, we were informed," he told Dutch news outlet DraadBreuk. "Either I got ignored, or we simply won't be making [the Nexus 6]."

Is it HTC you're looking for?

That doesn't mean mean we won't see a Nexus 6 handset in 2014, but it does seem that LG might be out of the game.

But if LG isn't making it, who is? HTC's rumoured to be building a Nexus 8 tablet for Google, so there's a chance it may also be tasked with producing the Nexus 5's successor.

However there's also the possibility that we won't see a Nexus 6 at all. A prior rumour, which came from seasoned insider @evleaks, claimed that Google would ditch its own-brand phone in favour of the Android Silver initiative. Perhaps the fact that LG didn't get a memo this year is a sign that the Nexus is dead after all.