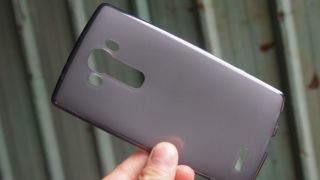 Hot on the heels of the first leaked LG G4 press image, LG G4 cases are already showing up in the wild. They're available to buy, so presumably the makers are fairly confident about the dimensions and design - or at least confident that eager buyers will snap them up.

It's not known whether they're based off the leaked press render or not, but they certainly look similar, with cut-outs for a camera lens, rear key and speaker grill, as well as two smaller holes which are likely for the laser autofocus and dual-LED flash.

It also looks as though the cases themselves are ever-so-slightly curved, which makes sense as not only did the original image show a curved back, but @OnLeaks, who dug up both that and the cases, has also posted additional images that suggest the G4 does indeed have a curvy screen.

You shouldn't have long to wait to get your hands on the curvy LG G4 though, as it's rumoured to be launching in April.