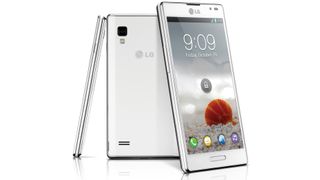 Originally announced way back at IFA, LG's Optimus L9 is a 4.7-inch dual-core Android handset, and its just launched in Australia.

With its 1GHz dual core processor, 2,150mAh battery and the Ice Cream Sandwich build of Android, the L9 isn't going to excite anyone on specs alone.

At $399, it's an affordable handset, although it is interesting that the much better specced Nexus 4 has the same price.

It seems odd that the Korean giant has dropped so far behind in terms of mobile sales in Australia. However, according to LG's senior marketing manager in Australia, the company reset its mobile strategy earlier this year into a two-tiered approach.

"We were bringing out handsets that brought to market the latest technologies, like 3D screens, dual core processors. The thing at that point of time was that one standout piece of technology in a smartphone is going to be enough to drive demand in the market place," Reed told Australian IT last month.

This year, the company has focussed on cheaper pre-paid devices like the L9, and new high-end flagship phones, like the Nexus 4 and the upcoming Optimus Q, which launches next year.