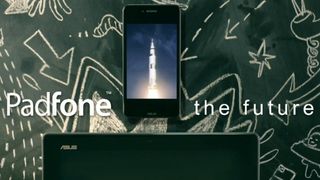 Asus sure loves to confuse us all with its naming schemes, but fans of the PadFone Infinity are in for a treat with the company announcing that the phone-cum-tablet is getting an update next week.

In Taipei on Tuesday Asus will make the new PadFone Infinity official, it announced today, and we're expecting the new vessel to come with a 5-inch full HD display, Qualcomm Snapdragon 800 SoC and the option of an all-white version.

For those unfamiliar with the PadFone's hybrid concept, it's essentially a smartphone that tucks inside a tablet to form an extension of the screen. It seems to be proving a winner for Asus too given that it's pushing ahead with the device.

Asus has posted a teaser video showing the phone rocketing out of the tablet, just in case you're still puzzled by how this all works. There's also a website up featuring a countdown to launch.

Aside from the spec upgrades we've already mentioned, the overall design looks set to stay much the same.

Oddly, Asus chose not make the announcement at its IFA press conference last week. But then it did have about a gazillion other things on the bill to get through, including the new Transformer Pad.