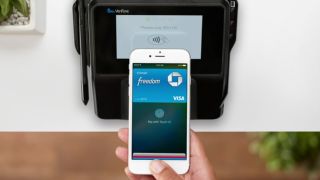 Apple Pay is on the way.

Last month Apple told us its mobile payments system would launch in the UK in July, and now we can be even more precise - 9to5Mac says the 14th is the date, based on documents it's seen from retailers.

That gives Brits until a week on Tuesday to prepare themselves for the arrival of the service that will let you swipe your iPhone or Apple Watch to make a payment, much as you already can with a contactless credit card.

Apple has already said that M&S, Boots, Costa, McDonalds, Subway, Waitrose and Transport for London will all be supporting the system at launch, which accounts for around 250,000 different locations.

According to the sources speaking to 9to5Mac, eager buyers will be limited to a £20 limit for transactions (again, just like a contactless credit card). Apparently that limit will be lifted in the autumn.

9to5Mac also says that staff at Apple stores are going to begin training on the 12th, ready to assist you in all your Apple Play queries and of course help you buy a new iPhone by swiping an old one... if you want to.

However, as Apple will know, getting UK shoppers to ditch cash and cards isn't easy. Samsung has its own payment system on the way too, so Apple Pay is by no means guaranteed to succeed.