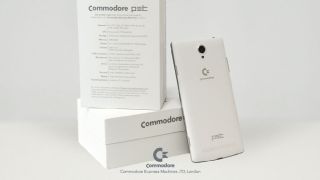 People of a certain age *awkwardly tugs collar* tend to get a little misty-eyed when talking about the great Commodore 64, as it was the machine that helped usher an entire generation into the world of personal computing.

Now, after changing hands several times over the last two decades, Wired is reporting that the Commodore name is back – as an Android-powered smartphone.

The Commodore PET (named after the Commodore's first full-featured computer from 1977) has a 5.5 inch display, a 1.7GHz octa-core Mediatek processor, a 13-megapixel rear facing camera and a 3000 mAh battery.

The PET also comes equipped with two custom emulators that allow us nostalgic-types to revisit our favourite Commodore 64 and Amiga games (I'm coming for you, California Games).

The phone will initially be available to buy later this month in Italy, France, Poland and Germany, and is expected to be released to the rest of the world in the not-too-distant future.