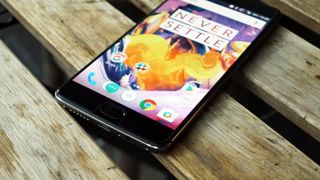 On the same day that the June 20 launch date of the OnePlus 5 was shared, we’ve now seen the most thorough and potentially revealing leak yet of the phone.

Coming in originally from Android Police, one of the leaked images (shown below) shows off an angled view of the front and back of the purported OnePlus 5. It doesn’t take an eagle-eyed phones fan to say “hey, this looks like an iPhone 7 Plus”, but that’s not such a bad thing.

Another spin on the design takes the look of the company’s OnePlus X mid-tier endeavor and evolves to match today’s standards. It could end up being available in a bunch of different colors and finishes, but the leaked image appears to show a matte black model, a pretty classic look.

According to 9to5Google, this image has been twice verified by anonymous sources to be legitimate, but we’ll have to wait until June 20 to know for sure.

More angles of the OP5

In case the image above wasn’t enough a look, another has come in from Twitter that reveals basically each and every angle of what appears to be the OnePlus 5.

As rumors up to this point have suggested, it will feature a dual-lens camera, or at least that's what this leak puts forward. This is backed up a bit by OnePlus itself, which teased that its new phone will really deliver the goods in the photo department with amped low-light capabilities and depth of field being the key highlights yielded by such a lens system.

It’s a bit tough to tell for sure, but the bottom right of the phone’s rear looks to show the concave indent of a headphone jack. This flies in the face of rumors stating that it would be removed, but again, we’ll have to wait to see what happens with this legacy jack.

The reveal of the OnePlus 5 inches ever closer, but only one question remains other than if this leak is legit: will OnePlus have any surprises left to show?