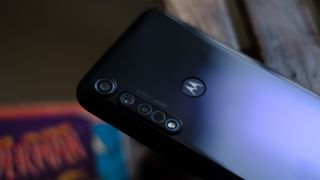 The Moto G8 Plus, above, could soon have two more siblings (Image credit: Future)

Motorola made the odd choice in late 2019 to launch the Moto G8 Plus but no standard Moto G8. But now it looks like the oddly absent Moto G8 is close to launch, alongside the Moto G8 Power, as both phones have just been extensively leaked.

First up, XDA Developers has information on the specs, obtained from a “trusted source” who has apparently accurately leaked Motorola device details in the past.

Both phones will apparently have a single-lens punch-hole camera on the front, physical fingerprint scanners embedded in the Motorola logo on the rear, vertically-aligned camera arrays on the top-left corner of the rear, and a generally very similar look.

As for the renders we promised, these apparently come from “industry sources” and were shared with 91mobiles. They only show the standard Moto G8, but as noted above the design of the two phones should be very similar.

The design, which you can see above, lines up with what we’ve heard from XDA Developers. Additional details that can be made out include a fairly large bezel below the display, a 3.5mm headphone port on the top edge, and buttons on the right.

The source adds that they expect the Moto G8 to come in both blue and white shades, both of which will apparently have a textured finish.

As ever we’d take all of this with a pinch of salt, but we shouldn’t have to wait long for official details, as it’s likely that Motorola will announce these phones at MWC 2020 in late February.