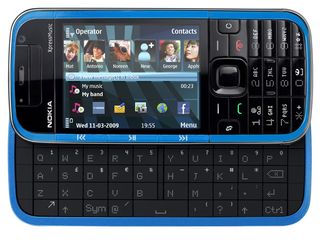 Nokia, not content with releasing the N97 as a bastion of QWERTY-based mobile phone functionality, has come up with the 5730 XpressMusic to complement the range.

Despite sporting another name that has onomasticians crying into their cornflakes, Nokia's new handset comes with a two-inch QVGA screen and full numeric keypad in addition to the slide-out keyboard, so those who love the tactile feel of buttons should be doubly excited.

Other natty features include the dot-matrix styling on the QWERTY keys, GPS, a microSD card slot, Symbian 60 OS and a four-and-a-half hour battery life.

We want one more G

The bad news is that it doesn't come with 3G, so power users wanting to type their hearts out on the train to and from work will have to do so at a slightly slower pace. However, it's fair to say those people would probably be more interested in the N97 or, dare we mention it, a BlackBerry.

Anyway, if futuro-retro styling is your thing on mobile phones, this is apparently coming to Europe in April of this year, for €220 (£200).