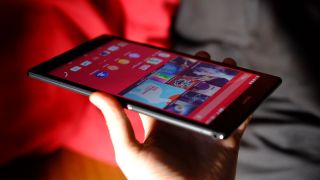 Yeah, a bit bigger than this Xperia Z3 Tablet Compact

The Sony Xperia Z4 Tablet Ultra might also reportedly have an HDMI 1.4 input jack that would allow 4K video recording at up to 30 frames per second. For some reason.

For comparison's sake, the iPad Air 2 has a 7,340mAh battery, though granted it's much smaller. The point is that this rumored Sony tablet is so powerful it might actually grow teeth and become sentient and murder you. Let's hope we see it at CES 2015.