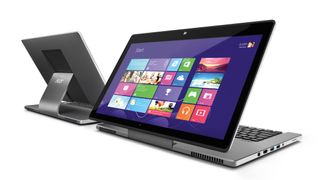 Now with even more pen-ness

Remember Acer's 'Ezel' hinge-toting Aspire R7 Ultrabook that was unveiled back in May? The company has announced that it's been refreshed with Intel's fourth generation Haswell processors (i5 and i7) and now comes with a digitiser for doodling Windows 8 gestures.

The new model, which will sport the version number R7572, will also ship with Windows 8.1 installed out of the box.

It can be fitted with up to 12GB of memory, up to a 1TB hard drive (or 256GB SSD) and features a full-sized backlit chiclet keyboard.

Acer has kept the trackpad above the board, which we thought was something of a revolutionary move when we put the machine through its paces back in May.

The Taiwanese computer maker has also announced an upgrade to its Aspire E1 notebook series, which can now be fitted with a 10-point multi-touch display.

It's available in 15.6-inch and 14-inch variations, and the larger model can be equipped with an Nvidia GT720M, GT740M or an AMD Radeon HD 8000M discrete graphics card.

Its smaller cousin is available with an Nvidia GT720M graphics card, and both models let you blow up the screen's contents using an onboard HDMI port.

The updated Aspire E1 will be available from mid October for around €399 (around £338).