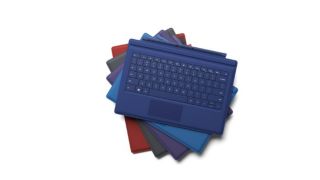 It looks like Microsoft is working on a new design for the Surface Pro Type Cover that will make it thinner than previous versions.

The Type Cover is a screen protector for Microsoft’s Surface Pro lineup of Windows 10 tablets, which contains a keyboard that allows you to use the tablet as a laptop-like device.

According to a patent application by Microsoft, the company appears to be looking into ways to make a future Type Cover thinner, which will help make future Surface Pros slimmer and more portable as well.

It seems like Microsoft is thinking about integrating the trackpad, which is used to move the mouse cursor, directly into the keyboard’s circuit board in the type Cover, allowing for a thinner design.

While Microsoft’s endeavours to make a future Type Cover, and the Surface Pro it attaches to, thinner, it does bring new challenges, especially when it comes to the feel of the keyboard and trackpad.

The thinner a keyboard is, the less travel the keys have, which means the less tactile feedback there is, and this can lead to an unsatisfying typing experience.

It looks like Microsoft is taking that into account, by including hardware switches, for example, that help give a clicking sensation to the trackpad when used.

If Microsoft manages to make a thinner Type Cover that is still comfortable to type on, then this will be a welcome innovation that could make future Surface Pro devices even more svelte. However, it could also mean a price hike for the already-expensive Type Cover, which is often sold separately.