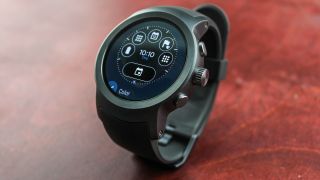 LG is heavily rumored to be working on a new smartwatch dubbed the LG Watch Timepiece, and it could arrive very soon, as it looks like it might have just got an FCC (Federal Communications Commission) listing.

The listing is for an LG smartwatch with the model number LM-W319, and while it doesn’t reveal much, other than the fact that this wearable runs Wear OS and supports Bluetooth and Wi-Fi, things don’t tend to pass through the FCC until they’re close to launching.

And there’s plenty of other evidence that we’ll see a new wearable from LG soon. Not only has it been well over a year since the LG Watch Sport and LG Watch Style landed, but the LG Watch Timepiece has been extensively leaked, and current rumors point to a release this month (June).

The best of both worlds

According to earlier rumors, the Timepiece is said to combine a typical Wear OS touchscreen experience with mechanical hands, allowing it to keep telling the time for much longer than a normal smartwatch.

Oddly, this isn’t the first LG smartwatch to pass through the FCC recently, as in May one with the model number LM-W315 appeared.

So it’s possible that LG has more than one new smartwatch on the way, or maybe two variants of the LG Watch Timepiece. Rumors suggest that the Timepiece doesn’t have GPS or NFC, but you never know, maybe one of these listings is for a version that does have those features. Hopefully we’ll find out for sure soon.