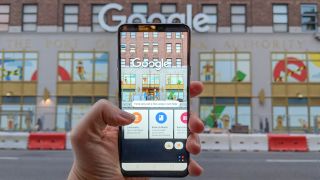 The death of LG's mobile business has been greatly exaggerated. In fact, it's doubling down on its 2019 smartphone prospects with a device that has two screens.

The LG G8 will be announced at the start of MWC 2019 next month, and it'll have a unique dual display and doesn't break the bank like its foldable competition, according to a new report out of Korea today.

Officially called the LG G8 ThinQ, it'll be different from its forthcoming foldable rival, the Samsung Galaxy X in that LG decided to use two screens that connect together instead of a single display.

The exact dimensions aren't definite, but when unconnected LG G8 is said to have a small screen that may be closer to 4 inches (the Korean report states that it'll be 3 inches, but we're told that may be the width of the display). Combined, it'll expand to have a 7-inch screen, similar to the size of a large phone or small tablet.

CNET states it won't actually be a 'foldable' phone like the South Korean report goes into detail about. How the two screens connect is a mystery, but LG's ability to join them together is supposed to be much more seamless.

Even if the report is accurate, the LG G8 ThinQ won't be the first phone to use two interconnected screens – the ZTE Axon M and a Sony foldable concept phone did this, too. However, the ZTE phone relied on a hinge.

While ZTE's dual-display approach resulted in a thick device with a large seam down the middle of the two screens, the LG G8 is expected to look like a single screen device when both displays are connected together.

Why LG thinks two screens are better than one

According to the report, LG's two-screen display design is a matter of price - two interconnected screens are cheaper to make than one foldable one. Samsung's phone is expected to cost more than 2 million won (about $1,786, £1,387, AU$2,491)

LG's phone asking price, on the other hand, smartphone won't cost much more than the current premium-tier smartphones, and is estimated to be around 1 million won (about $893, £693, AU$1,245).

The company's drive to unveil a two-screen smartphone at a lower price than Samsung is thought to be an attempt to reverse its recent fortune in mobile, and could be a sign that it's getting back to its roots by offering more value with its smartphones.

New software for LG G8 and other phones

The dual screen design isn't the only thing new, either: Going along with the foldable G8, LG is expected to introduce a new user interface dubbed the 'Touchless' input.

The new input mode is supposed to allow sensors on the front of the phone to recognize hand gestures without direct screen contact. The report mentions that these sensors will be able to pick up your hovering gestures – including swipe gestures – 20 to 30cm away from the actual screens.

The goal? To make it easier to operate the dual screen foldable smartphone from any position. The Touchless input is supposed to expand beyond the LG G8, with plans to have it come to the V series and other LG phones.

We'll have more on the LG G8, as it continues to leak. We expect more details in the lead up to MWC 2019 on February 25, and of course, well-timed leaks ahead of the Samsung Galaxy S10 launch on February 20.