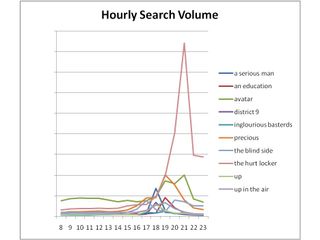 Google has announced what were the most-searched for results while the Oscars were on, with some interesting phrases popping up.

The information, posted on Google's blog, shows some obvious surges in search traffic for The Hurt Locker, the Best Picture winner, which garnered the most searches for an Oscar-nominated film.

Jeff Bridges, Sandra Bullock and Kathryn Bigelow also caused traffic spikes, but perhaps the most interesting was the rise in searches for the words 'spooning' and 'catharsis'.

"The Oscars led to spikes in searches for [catharsis] (from Robert Downey Jr's presentation with Tina Fey) and [spooning] (Colin Farrell talking about Jeremy Renner)."

So, there you have it – the Oscars brought with it lots of cathartic spooning.

Who needs a dictionary, when you have Google, eh?