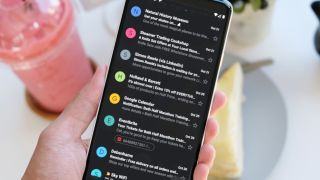 Gmail dark mode was a long time coming, arriving months after the launch of Android 10, and now some users have opened their inboxes and discovered that the app has reverted back to its old white design.

As 9to5Google reports, many users discovered that the app had switched back to its old look over the weekend without them changing it manually. Worse still, the option to switch back had mysteriously vanished from the app's settings.

On phones running Android 10 (such as Google's own Pixel handsets), the settings should let users switch between light, dark and system default color schemes, but for affected users, these options are no longer available.

No other apps seem to be affected by the bug, and not all Android 10 devices seem to be suffering the problem, but for those that are, it's annoyingly persistent. Restarting the app doesn't seem to have any effect, and neither does rebooting the phone.

Blinded by the light

Unfortunately Google itself isn't offering any advice (beyond sharing a rather unhelpful document explaining how dark mode should work), but if you're one of the unfortunate ones though, there is a trick you can try to turn your phone back to the dark side.

Pressing and holding the Gmail app icon and visiting the App Info page will reveal a Force Stop option. Some users have found that selecting this, then restarting the app, will restore the dark mode option.

However, this doesn't seem to be universally successful. Hopefully Google will acknowledge the problem and release a fix soon. We'll keep you updated as soon as we know more.