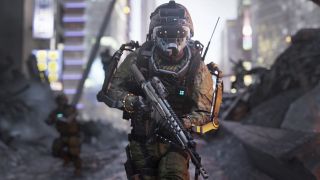 Call of Duty takes an unsurprising trip to the future

By the time the Xbox One and PS4 reach their one-year anniversaries this fall, the future of gaming will have begun to take shape.

Just look at the games shown off at E3 2014 last week: from Halo: The Master Chief Collection and Sunset Overdrive to Destiny and The Crew, many of the biggest games will be out by the fall.

And by then owners of the latest consoles should have a pretty good idea what they're in for over the next several years.

The question is, do the games shown off at E3 by the major players - Microsoft, Sony, Ubisoft, 2K, Activision, etc. - represent the future that gamers want?

It wouldn't be a Microsoft E3 without some Halo news, and this year's announcement of Halo: The Master Chief Collection was well-received by fans. And no wonder, considering the game collects all four numbered Halo titles on one disc, with their original multiplayer engines.

Behind closed doors at E3 Microsoft delved into the ways the collection handles all that content, including playlists that feature curated selection from the campaigns (playing every Warthog level in a row, for example), plus the ability to jump seamlessly among all the game's maps and game modes in multiplayer matchmaking.

It's all very exciting for Halo fans, and it shows how the Xbox One's power can be leveraged to revisit old games in new ways. But that wasn't the only thing Microsoft showed off at E3.

An extended gameplay demo of Sunset Overdrive showed just how smart the game's traversal system is - players will bounce and grind on nearly every service, rarely stopping, slowing down or hitting the ground. But it also demonstrated how new games are integrating fan-made content more than ever, with a community web show playing on screens inside the game itself.

Meanwhile Forza Horizon 2 takes the Drivatars introduced in Xbox One launch title Forza Motorsport 5 to the next level. These AI-driven cars replicate how players on your friends list drive, from what shortcuts they take to how often they brake, and they'll be present in every aspect of Horizon 2.

Traditional AI is a thing of the past, the developers say, and it's been replaced by Drivatars that think and act like your actual friends.

But Microsoft didn't only show off its own games during its pre-E3 press conference, and one of the best third-party offerings to appear was Ubisoft's Assassin's Creed Unity, despite its troubling lack of female characters.

It's not really possible for an Assassin's Creed game to be surprising anymore, considering they come out literally every fall. But Unity was, if nothing else, impressive.

The graphical jump from the last generation of consoles to this one hasn't always been very pronounced, but Unity truly does look next-gen compared with last year's Assassin's Creed: Black Flag. And like many newer games coming out, cooperative play is a focus - a first for an AC game.

Ubisoft also made a strong showing at its own press conference with The Crew, Far Cry 4, Tom Clancy's The Division, and especially Rainbow Six: Siege.

The Crew is an open-world driving game that's unique in that Ubisoft claims players will be able to drive literally from coast-to-coast of the United States. And it seems that's more or less true: you can drive from Miami to Los Angeles or New York to San Francisco in an hour or two, the developers said.

Obviously the map will include only major locations, but its sheer size is nevertheless impressive.

Revealed for the first time at E3, Far Cry 4's sandbox world also looks fun, though for different reasons. Highlights during hands-on time at Ubisoft's booth included riding an elephant into battle and, especially, raining grenades on enemies below from the safety of a tiny helicopter above.

It's solid, but there's nothing truly revolutionary there; just more of the same, which unfortunately is starting to look like a trend in next-gen games. The Division and Rainbow Six: Siege might buck it, though.

The former, first revealed at E3 in 2013, was unfortunately still not playable this year, but in private demos the MMO third-person shooter set in a disease-stricken NYC still looked good. For those tired of the now-hackneyed apocalypse trope, though, Rainbow Six: Siege may look even better.

It's the return of a classic series, but as a multiplayer-only shooter Siege barely resembles its predecessors. Teams of five compete to complete objectives, such as rescuing or capturing a hostage, in the case of the footage Ubisoft showed at E3.

A team of terrorists held the captive inside a house, while a strike team breached it from outside. Players had to deftly coordinate and improvise, even blasting holes in the walls to surprise their opponents. It looked truly next-gen, though with a tentative 2015 release date it's still far off.

Current page: Microsoft and Ubisoft and the future of games

Next Page Sony, and more on the future of games
See more Consoles news