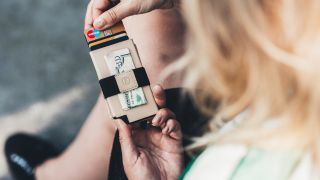 Losing your personal wallet can be agonizing and stressful as it contains your credit cards, bank cards and personal information. A Rotterdam-based start-up, Ekster, is integrating today's connected technologies to make it smart and traceable.

As the world is increasingly getting connected with the internet of things, Olivier Momma, founder of the company, told TechRadar Middle East that people are worried about the security of their electronic products.

What is a smart wallet?

Besides holding multiple credit cards and your cash, a smart wallet helps keep your personal information safe and secure from hackers by using RFID-blocking technology and, at the same time, the wallet can be tracked through a smartphone app.

“In my view, the smartphone will take over wallets after a few years but for now, wallet and the smartphone are the two most valuable assets for a consumer,” Momma said.

Smart wallets are drastically growing as new competitors are entering the market every year and Momma said that there are already three players live on Kickstarter selling their products.

Ekster’s name was inspired by the bird “Magpie”, also known as “Ekster” in the Netherlands.

Momma said that he had no idea when he started the company four years ago but was keen to innovate and grow. “Our third-generation wallet, Ekster 3.0, is the world’s first solar-powered and first voice-activated [Siri, Alexa, Google Home] tracker in the world with instant card access.

Using a solar-powered tracker as thin as a credit card, people can now ring their wallet or find it on a map if lost,” he said. He added that two hours of light is enough to power the low-energy wallet for two months.

“The light does not have to be sunlight alone, it can absorb light by leaving it under your desk and it takes light from anywhere to charge it,” he said. Solar technology was useful and became the most advanced solar panel in the world by accident.

“The patented solar technology is now licensed to FedEx and DHL for their own container tracking requirements and our solar panels are already being implemented to power digital displays and sensors in the Netherlands,” he said.

According to the firm, RFID/NFC blocking cardholder is non-hackable as it protects the cards from wireless skimming and private data theft.

“Our sales are growing across the globe and have sold 200,000 units so far and plan to sell another 100,000 units this year. The biggest markets are the US, Canada and the UK,” he said.

Also, the company has raised $3 million last year and plans to raise $5 million this year through Webshop.

“Our next aim is to expand innovate solutions for safeguarding daily accessories and make it smart, traceable and more connected,” Momma said.