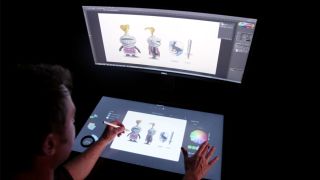 It looks like Microsoft isn't the only one looking to turn your desktop into an all-in-one studio.

Dell appears to be working on its own take of a computer for creatives called the Smart Desk, which features an entire second screen that allows users to get totally hands-on with their work space. It's even complete with the company's own interpretation of the Surface Dial, the knobby peripheral for the new Surface Studio PC.

We got our first glimpse of the Smart Desk in action from a sizzle reel at Wednesday's Adobe MAX conference, showing off the device's ability to fine-tune selections with its dial controller, and use a stylus and touch gestures to draw, zoom, search, and adjust whatever the user is working on – not unlike Wacom's Cintiq line of pen and tablet displays.

For those who don't want to scrub through Adobe's livestream, Dell posted its own teaser, which you can watch below:

Where have we seen this before?

Many similarities can be drawn between Dell's Smart Desk and Microsoft's Surface Studio, with both aiming squarely at the likes of digital artists, engineers, and architects, although it's too soon to tell which one is the clear standout.

What we can tell, however, is that the Smart Desk and Surface Studio are leaning hard into design and production, which could make them direct competitors to Apple.

Recent pushes to cut down the size of the recently launched MacBook Pro have actually made it less appealing to some creatives, which is  ironic given Apple's reputation for making computers better suited for art than PCs.

Considering that the cost of a Cintiq on top of a high-end computer can really add up, we can see Dell's touch-enabled surface having considerable appeal in the digital art community – provided it's not too expensive, of course.

Dell has yet to divulge any of the critical details, like price, availability, or any compatible devices, but the company also teases that an official Smart Desk announcement will come at CES 2017.