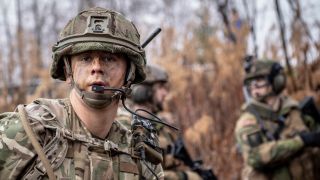 In battle, it’s essential to get the right information to the right people at the right time – but no too much. That’s the role of the British Army’s Royal Corps of Signals, whose skills were put to the test in freezing conditions during Exercise Trident Juncture 2018 in November.

Trident Juncture was a training exercise simulating an attack on a NATO member, and included 40,000 personnel from (all 29 NATO nations, plus Finland and Sweden. TechRadar was invited to join the British Army at their base about two hours outside Oslo, where the Royal Signals and Corps of Royal Electrical and Mechanical Engineers (REME) demonstrated some of the technology they use to win the information war.

Trident Juncture wasn’t just a showcase – it was an essential training exercise, with nations working together, acclimatising to extremely cold weather, and evolving their skills and technology.

The Royal Signals’ role is to provide reliable, secure communications on the battlefield. They are among the first into action, setting up essential infrastructure for the whole exercise. In Norway, they had already set up a whole headquarters before TechRadar arrived – a full communications hub sited in the middle of a running track.

“We’re designed to bring communications to the commander in battle for them to be able to win that information war,” explained Warrant Officer 2 (Foreman of Signals) Aaron Russell.

All Royal Signals go through basic soldier training, then specialize in a particular trade. These include communication officers, communication systems engineers, combat logistical specialists, but won’t be limited to one specialism throughout their careers – every soldier has an understanding of what the others do, and will often switch trades.

In recent years, the Royal Signals have begun working closely with industry partners like Vodafone, Cisco and Microsoft sharing skills like technical leadership and supporting innovation. “We learn a massive amount about emerging technology,” explained Foreman Russell. “We get to see what they’re looking at.”

Working with industry also has advantages when soldiers leave the army, because they have transferrable skills – and their civilian work then feeds back into the army with future attachments.

It’s the same in the REME. “We’re trying to get the professional accreditation, aligning is with civilian engineering bodies,” explained Staff Sergeant (Artillery Vehicles) Simon Neary.

“We do a lot of visits up to the Toyota factory,” he added. “That was a massive eye-opener for a lot of our younger lads where they’ve seen the process of literally starting with sheet metal to a finished product rolling off the production line with all the systems that go into vehicles these days, it’s a massive eye-opener. And we do that regularly now.”

The British Army also taking lessons from start-up culture, and there’s now more acceptance of learning from mistakes. Now, the army is seeing many new recruits who are well into their 20s and appreciate the extra challenge and responsibility of making their own decisions.

“[The soldiers] have enjoyed getting qualified and there’s not many people get to practice their skills in the cold, in the heat, sometimes in the rain in the UK,” Foreman Russell said. “Having that responsibility for your own destiny and the way you deliver, and the culture to allow you to accept failure and accept risk is getting a lot better, and we’re learning from that.”

“As a supervisor in a supervisory role, I could have a junior soldier come in, and he could be technically gifted,” said Staff Sergeant Neary. “So it’s not the fact that I’ve got a higher rank and mine’s the best idea. He could have a brilliant idea and they know that if it doesn’t work, they’re not going to get jumped on.

“And it develops us as individuals as well. It gives us the strength to not just stand at the back, watching what’s going on, but also be at the forefront of something. Then if they do a brilliant repair or on the digital side of things, they get praise for that.”

That kind of flexibility is essential in an environment like Norway; even simple communication tasks like erecting radio masts could be a challenge due to the frozen ground.

“Especially in these environments, you might be restricted to what you can have,” explained Staff Sergeant Neary. “You can’t have the full vehicle with the spares with you. You have to take very limited packs of spares.”

In the future, 3D printing might make life easier, but you’d still need to transport the raw materials for the printers and the technology just isn’t reliable enough yet.

“Planning starts months before just in terms of getting packs of spares together,” said Staff Sergeant Neary. “Anything from electrical spares to just batteries to fuses, to the simples little things – door handles, wing mirrors, anything, and just getting them together so when we come out here it’s just what’s going to fail, what’s going to happen and just pre-empting that within the plan.”

Keeping the lights on

The technology on the ground in Norway was tough, and although some of it had been in service over 10 years, it was dependable and rugged. The headquarters was  entirely self-sufficient, powered by three surprisingly quiet petrol generators, which have no heat signature except for the exhaust.

“It may look clunky – it won’t be as high tech as San Francisco and places like that – but it’s a lot more technical than I think we might let on, and people understand it to be,” said Foreman Russell.

The headquarters had a separate generator for Reacher – a satellite communication terminal that delivers Skynet services to the battlefield (the battlefield might have super-fast mobile broadband, but using civilian mobile networks would leave communications vulnerable to interception).

All the generators are linked and communicate with one another. When the first generator gets up to 80% capacity, it calls for help from the second generator, which then powers up and they share the load, so they aren’t at full power the whole time. Having the generators in parallel also means that if one fails, the others can take the load and there’ll be no noticeable drop of power inside the headquarters. It’s also good for servicing – an electrical engineer can take one offline and nobody will know the difference.

The headquarters was built around the communications – the electrical engineers ensured that the essential equipment (specifically the tactical radios, which provide secure voice and data communications) had power, then built everything around that based on the soldiers’ requirements. It’s possible to have a generator off the truck and powering the radios within 20 minutes in an emergency.

Exercise Trident Juncture wasn’t just an opportunity for the British Army to learn from its own experiences – it was also a chance to share knowledge with its allies and pool their knowledge.

“We’re tracking a fault at the moment that’s taking us back to our basics, which sometimes is really interesting, and allows us to have a bit of training benefit to being here,” said Foreman Russell.

Even if it hadn’t been possible to find the root of the fault, the experience would feed back into the bigger picture with other regiments and other nations, who might see the same fault. With that pool of collective knowledge, it’s much more likely that the problem will be diagnosed, and every nation can learn from it.

“A lot of this is about interoperability, and learning from that,” Foreman Russell concluded. “This exercise isn’t just a showcase – it’s about getting better. And if for everything we do we can get better, that’s evolutionary really.”