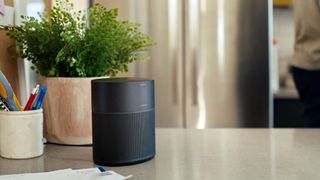 Bose entered the smart speaker market a tad late, beginning with last year's Home Speaker 500. However, it launched with a price tag of $600 in Australia, making it one of the most expensive options around – after all, you could pick up a Google Home or Amazon Echo for under $200. Heck, you could even get yourself a pair of Sonos One speakers for less than the cost of a single Home Speaker 500.

Now, Bose is launching its Home Speaker 300 in Australia – a smaller, more affordable version of its larger sibling which brings the audio company's signature sound to a smart speaker equipped with both Google Assistant and Amazon Alexa functionality.

Standing just six inches tall with the same aluminium body as its bigger brother, the Bose Home Speaker 300 boasts 360-degree sound. And where the Home Speaker 500 came with just Alexa support at launch, the smaller speaker comes with both Google Assistant and Alexa built-in.

There’s also AirPlay 2 support for Apple users, along with Wi-Fi and Bluetooth connectivity.

The Home Speaker 300 is available for pre-order now in both Black and White colour options on Bose’s Australian website for $399.95 and will arrive on the shelves of major retailers on August 15.

Google Assistant for all

Bose was one of the first audio companies to launch headphones with Google Assistant support, but its speakers and soundbars launched with just Alexa built in.

Back in early July, competing brand Sonos updated its range of smart speakers and soundbars with Google Assistant support after initially launching products with only Alexa built-in. With Bose doing the same thing, Aussies now have more flexibility to choose which voice assistant they’d prefer.