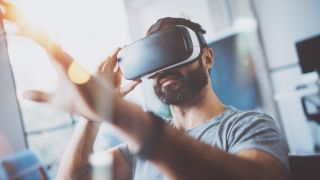 Welcome to our pick for the best business virtual reality (and augmented reality) headsets.

There are loads of reasons why you'd want to invest in a business virtual reality headset. They can be used by architects to step inside their blueprints, or to show potential customers what your product will look like in the real world.

They can also revolutionise meetings between co-workers in different locations, and help design products in a 3D space. With the best business virtual reality headsets, the only limit (apart from cost and hardware) is your imagination.

Speaking of cost and hardware, while some enterprise-level virtual reality headsets remain expensive - and require powerful hardware to run - there are a growing number of affordable VR and AR headsets that are ideal for business use.

Microsoft's Windows Mixed Reality platform has brought some brilliant and affordable headsets from a variety of manufacturers, including HP and Dell, and their hardware requirements are pretty restrained, so don't worry about having to splash out on a cutting-edge powerful PC.

In this guide we've listed the best business VR headsets which balance performance, comfort and affordability, and we've included a range of headsets to suit all budgets and use cases.

If you want the very best VR experience for your business, then the HTC Vive Pro is currently our pick for the best business VR headset. It comes with a resolution of 2880 x 1600, offering a 78% increase in dots per inch than the standard HTC Vive. This leads to astounding image quality, so if realistic graphics are important, this headset is worth considering. It also includes built-in headphones and new nose guards that do a better job of blocking out light than the HTC Vive. Setup is a bit complicated, however, and you need to install lighthouses (small boxes) around the office to track the HTC Vive Pro. It's also one of the most expensive headsets in this guide.

If you need to use VR on the road - for example visiting customers and clients at their offices - then you don't want to be lugging around a VR-capable PC. That's why the Oculus Quest is such a great headset. There are no wires and no pricey additional equipment requirements. The Quest delivers six degrees of freedom (6DOF) tracking thanks to its two motion controllers, which look like the older Oculus Touch with some minor design tweaks, as well as sensors located on the sides of the headset. It's compact enough to carry around, and comfortable to wear. The Quest has an OLED display panel with 1440 x 1600 per eye resolution. Images on the screen look clear and colorful, and it's powered by a Qualcomm Snapdragon 835 processor.

As we mentioned at the beginning of this guide, Windows Mixed Reality headsets offer a brilliant VR experience for businesses, and the Samsung HMD Odyssey is currently the best WMR headset yet.  While not exactly on par with the Oculus Rift and HTC Vive in terms of sheer graphics rendering, it comes very close, with excellent build quality and performance. The screens pop with a resolution of 1,440 x 1,600 pixels per side and a refresh rate of between 90 to 60Hz. This is a higher resolution that most other Windows Mixed Reality Headsets, and puts it in the same league as the HTC Vive Pro, though less pricey. It is the most expensive WMR headset, however, at $499 (about £377, AU$635). But, it’s the only one to include built-in headphones with spatial audio.

If the HTC Vive Pro (listed above) is too expensive for your budget, then the original HTC Vive is a more affordable (but still expensive) choice. It features room-scale tracking that lets you to walk around a space that's 4.5 x 4.5m big, which adds immersion to anyone using it – though of course you'll need plenty of space to make use of it. The headset features two 1080p screens, which is fine for most use cases, though the HTC Vive Pro comes with a 78% increase in dots per inch, which offers a much sharper screen in addition to built-in audio, which the original Vive lacks. However, despite not being the latest and greatest Vive, the fact that it has seen some decent price drops makes this one of the best business VR headsets around.

Despite some hiccups, Oculus Rift will take your breath away

The Oculus Rift is the other big name in PC VR – and while it's primarily gaming focussed for now, like its rival the HTC Vive, it is also one of the best business VR headsets. With Facebook buying Oculus for $2 billion a few years ago, this headset now has a far wider remit than just virtual reality games. It's also seen some decent upgrades over the years thanks to the inclusion of the Touch controllers (which we'd argue are slightly superior to the Vive's), and a couple of key price drops. It can also now do room-scale tracking, though not quite as well as the HTC Vive does it, and it's more affordable as well.

Samsung Gear VR is the best mobile virtual reality headset, and now that it has a motion controller, it's better than ever. In addition to the new controller, the updated Gear VR is lighter and more streamlined, and features a USB-C connector that hooks directly to a Samsung Galaxy phone. You don't need to bring a PC or laptop with you to power the Samsung Gear VR, which makes it brilliant for using when out on the road. You do need a Samsung smartphone, however, such as theGalaxy S8 and Galaxy S8 Plus, as well as the Galaxy S10 and Galaxy S10 Plus. The included motion controller is similar to the HTC Vive controller design, with a touchpad and trigger button. If you have a Samsung smartphone and want to use VR for your business, this is a great choice.

Google Daydream View is another great mobile virtual reality headset, and while it's not quite as good as the Samsung Gear VR above, it's more flexible, as it works with most Android smartphones – not just Samsung ones. One of the best things about this VR headset is its price; it's less than $100 / £100, and a recent discount has made it even cheaper, at least for the time being. It's also an incredibly easy headset to use – all you need to do is install an app on your phone, and then place your phone inside the headset. Once done, you can use the included controller to move about virtual reality spaces. You won't get the deeply immersive worlds of a higher-end, PC-powered VR headset with the Google Daydream View, but you will get a device that's nicely designed, works with plenty of smartphones, can easily be carried around and is relatively cheap.