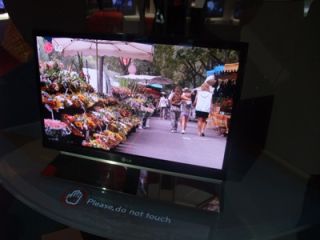 LG will produce OLED screens with around 32-inch screen size by 2012, through subsidiary LG Display.

The news was confirmed by CEO Kwon Young Soo at a recent news conference, who said the company was happily looking at larger screen sizes.

(We assume the 30-inch quoted is a typo, as we've never heard of such screen dimensions. However, if it debuts at that size, you heard it here first...)

"The commercial success of OLEDs hinges on how it shows its superiority compared to existing liquid crystal display (LCD) technologies.

"We will focus on TV panels rather than cell phone panels because the larger the display, the more efficient the OLED technology."

We've also got to take this news with a pinch of salt after the same company stated it would be bringing 32-inch OLED TVs next year, so it could be a case of mis-translation or random dates being spewed out by the Koreans for fun.

Samsung has recently been intensifying its efforts into the OLED space with the formation of Samsung Mobile Displays, and has launched a slew of mobile phones based on the technology, which it believes is better suited to the smaller screen.

But LG has been noticeably absent from bringing OLED tech to its mobiles, which is strange given the rumours it has tied up deals with Apple and Nokia to supply the displays to future portable devices.