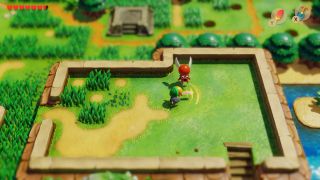 Hold onto your Minish Caps, Legend of Zelda fans: Nintendo has announced a medley of new features and items available in Super Mario Maker 2, one of which lets you don the green garb of the Hylian hero.

An incoming update for Super Mario Maker 2 lands on December 5, and includes a 'Master Sword' item that turns Mario into Link from the Legend of Zelda series.

The item is only available in the retro Super Mario Bros. Game Style, meaning you won't see any 3D Links running about – like, say, in Super Smash Bros. Ultimate – but you do get to enjoy his 8-bit pixelated presence. And it's not just the Master Sword you get to play with, either.

A press release from Nintendo stated: "After downloading the Ver. 2.0.0 update, the new Master Sword item will be available to use exclusively in the 8-bit Super Mario Bros. style. When this new course part is picked up, Mario will transform into Link, equipped with a new set of moves like attacking with a sword, shooting arrows and dropping bombs."

While the Zelda crossover is most notable part of the video, you can also see Mario making use of the other items being added below: