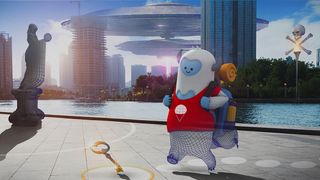 Stand aside, Apple: Niantic (of Pokémon Go and Harry Potter Wizard's Unite fame) and Qualcomm are busy working on a pair of augmented reality glasses, the two companies have announced.

In the not-too-distant future, you could be catching Pokémon, or banishing monsters, or doing whatever else is involved in Niantic's next game without having to awkwardly hold your phone in front of your face to see the computer-generated creatures.

The "multi-year joint collaboration" will cover software as well as hardware, Niantic says, although as yet there's not a lot of meat on these bones – no mention of a date when we might actually see a device, for example.

What we do know is that the new AR specs and the associated platform will leverage both AI (to make digital objects seem as real as possible) and 5G (to ensure no buffering or drops in frame rate, even in crowded spots).

So near, so AR

The AR-enabled eye-wear will act as a reference design for the new Qualcomm Snapdragon XR2 platform, building on something similar Qualcomm developed last year, and which incorporates virtual reality as well as augmented reality.

There are some big upgrades over the previous XR1 standard, including improved resolutions (up to 3K per eye at 90 frames-per-second), as well as support for a greater number of tracking cameras.

Several manufacturers are thought to be interested in what Qualcomm is pushing here, so we might see quite a number of Google Glass-style specs hit the market in 2020 and beyond. Apple is another manufacturer known to be working on something like this.

The news has come out of the annual Snapdragon Summit, where we've heard plenty more about Qualcomm's plans for the future – from the mobile chipset that'll be powering the Android flagships of 2019, to the office of tomorrow it's making with Microsoft.