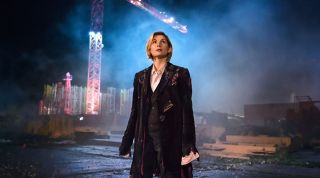 There are plenty of options for TV streaming these days, especially with the recent launch of both Apple Plus TV and the upcoming Disney Plus, but if you're hankering for some good old British television, BritBox may be all you need.

BritBox is an online portal for British TV boxsets and original programming, bringing all sorts of modern and legacy TV content from the UK’s biggest broadcasters. Granted it's not quite a Netflix killer, but it's not meant to be. Instead, it could certainly become a potential disruptor that brings together decades worth of beloved British television.

First envisaged as a way of exporting classic British TV to the US and Canada, the TV streaming service has now launched in the UK too – despite there being various catch-up services for BBC and ITV content already.

But there's still plenty to recommend on BritBox, which has a massive back catalogue of British shows like Doctor Who, Agatha Christie's Poirot, Gavin & Stacey, Coronation Street, or even ITV's Love Island. If you're in the UK, some of these are available via the BBC iPlayer and ITV Hub catch-up services already – while Netflix and Amazon license a handful of BBC shows – but for those of you in the US and Canada, it may well be the only way to get your hands on these classic TV series.

Here we run you through what to expect from BritBox, what a subscription will cost, and why you might consider signing up for the service.

UPDATE: BritBox has now launched in the UK, bringing a new way to access classic British dramas and TV series to UK citizens. For those already using iPlayer, it may feel like an odd repackaging of existing titles, but you can find out everything you need to know about BritBox below.

Good news Doctor Who fans! From Boxing Day, which is December 26, 2019, BritBox will be home to more than 600 old episodes of Dr Who dating back to 1963 – what better time to binge on every old episode of Dr Who than over the boring bit between Christmas and New Year?

The brainchild of two British broadcasters, ITV and the BBC, BritBox is an online, ad-free, subscription-based streaming service designed to export British programming beyond the UK’s shores – and is now available in its UK homeland too, as of November 2019.

It’s no secret that viewing habits have been shifting online, with the rise of Netflix, Amazon Prime, Hulu and the like eating away at viewing numbers for traditional broadcasters. Both ITV and the BBC have their own online catch-up services already, which include ITV hub and BBC iPlayer, but joining forces for a larger online offering is likely the best way to ensure their long-term survival in a fiercely competitive online market.

Speaking to BBC News, former BBC executive Ashley Highfield suggested BritBox wasn't "something that's going to take over from Netflix. It's probably going to rub alongside."

It’s not clear what this means for ITV Hub and iPlayer, though we could imagine the services being folded into the larger BritBox platform going forward. The original announcement for the UK launch specified that the platform would be used for BBC and ITV shows, while hinting that other UK broadcasters were likely to cooperate on BritBox in the future.

It's worth noting that a similar project was shuttered by the UK's Competition Commission in 2008, after concerns of how powerful a combined streaming platform for the UK's major broadcasters would be. So for BritBox to come to the UK, there may be stipulations that it doesn't roll up too many catch-up services under one banner.

So does my country get BritBox?

If you’re reading this, probably! BritBox launched in the United States in 2017, and came to Canada the following year.

As BritBox initially intended as a way to export British TV shows outside the country, it’s only recently we caught word of plans to bring the platform to the UK – with a hesitant release window of October-December 2019.

We expect that BritBox will roll out to other territories in the future, to limit the BBC’s reliance on Netflix and competing streaming services to showcase their content globally.

For watching BritBox on a web browser, all you have to do is head to www.britbox.com.

Depending on where you are, the process might then be a bit different. Once on the site, you'll be invited to sign up for a 30-day free trial (this was previously a 7-day free trial in the US and Canada) before payments start being taken monthly from your account.

There’s also a dedicated BritBox app on Google Play and the App Store for streaming to your phone, tablet, or computer.

US subscribers to Amazon Prime Video can also subscribe to BritBox via Amazon Channels.

How much does BritBox cost?

The UK service costs £5.99, matching the price of Netflix's Basic Plan, but with HD streaming instead of just standard definition. Paying for a TV license fee (as you would for BBC iPlayer) won't cover the subscription cost, though.

It's worth noting that the BBC only owns 10% of BritBox, with ITV owning the remaining 90% – so we expect the Beeb to net smaller returns than its partner from viewer subscriptions.

What shows are actually on BritBox?

BritBox combines the best of BBC and ITV programming, including staple soap operas, such as Coronation Street, Eastenders, Holby City and Casualty – new episodes of which appear on the service within 24 hours of initial broadcast.

The real draw is legacy content on the service, with thousands of hours of television from British tentpole programmes like Gavin & Stacey, Poirot, Miss Marple, Fawlty Towers, The Office, Midsomer Murders, Doctor Who and Absolutely Fabulous. BritBox also has hundreds of episodes of Doctor Who dating back to the 60s, for those of you not sated by recent seasons.

The BBC’s Director General Tony Hall clarified BritBox wouldn’t replace iPlayer – the BBC’s online catch-up service, which is supported by a license fee rather than a monthly subscription – though there will undoubtedly be an overlap in the programming available.

We expect BritBox to mainly host legacy content, with newer shows and programmes appearing after spending some time on the ITV Hub and BBC iPlayer catch-up services. This BBC News article on the announcement confirmed that "Many ITV and BBC programmes will move on to BritBox after they have been broadcast on TV and fallen off the broadcasters' own catch-up services."

BBC iPlayer currently can only host content for 30 days after broadcast, though it is appealing to Ofcom to extend this to a whole year instead.

If you’re in the US and want a proper look at iconic British programming from over the years, BritBox is a relatively cheap subscription service with plenty to keep you busy. It doesn’t have the variety of Netflix or Amazon Prime Video, but you won’t get a similar concentration of British gems anywhere else.

And if you’re in the UK? It certainly has a lot of British classics in one place, but it's not entirely comprehensive – that might change when Channel 4 content joins the line-up in 2020, and as more and more classics like Doctor Who find their way onto the service (600 older episodes are coming to the platform by the holidays). The line-up of classic films could do with some improvement, too. The differentiation between BritBox and other services has to be how wide the archive is. It's not quite there yet, but with time it could be.

If you already pay a UK license fee, you may well want BritBox to access content once they've dropped off these catch-up services. but keep in mind you are effectively doubling up your expenses to access the same content in various places.