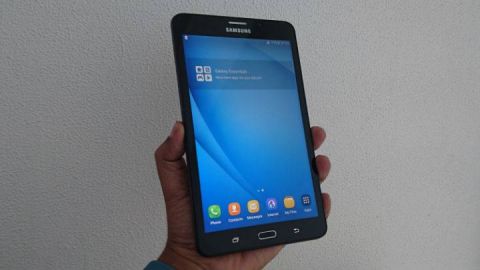 The Samsung Galaxy J Max, sadly comes across as a confused product, which fails to excel either as a smartphone or as a tablet.

Samsung has launched the Galaxy J Max in India for a price of Rs 13,990.

The J Max is very perplexing device. Samsung says that the J Max is designed for those who are looking for a complete entertainment experience on a mobile device.

In a bid to make it more palatable to those wanting to use the device as a smartphone, Samsung has bundled a Bluetooth headset in the box. The Galaxy J Max also comes with a one-year premium ad-free subscription of Viu, which offers unlimited Bollywood and regional movies, TV shows and webisodes.

Now, what exactly is the Samsung Galaxy J Max? Is it a smartphone with a humongous display or is it a 7-inch tablet that happens to also make calls? Let's find out!

The Samsung Galaxy J Max is one of the better looking smartphones in Samsung’s budget lineup and looks classy and premium.

The build quality is great, and the device feels very solid in the hand. This is a breath of fresh air and a marked departure from Samsung’s usual uninspired and boring designs in this price range.

The back is non-removable and the device has the dualSim and microSD slots on the right hand side, which are covered by flaps. The microUSB port and 3.5mm headphone jack is located on the top, with the single microphone on the bottom.

The rear houses the 8MP primary camera, LED flash and the speaker unit. The bottom firing loudspeaker is strictly average, with audible distortion at high volumes.

The front of the device is dominated by the gigantic 7-inch display, with a physical home button flanked by two capacitive buttons for back and recent apps located under the display.

Unlike the rest of the J series lineup, the J Max doesn't come with an sAMOLED panel, and makes do with a 7-inch WXGA display. The display has a resolution of 1280 X 800, which translates to a pixel density of 216ppi.

While this is not an outright negative, as the display has more realistic and neutral colors, one does miss the sheer vividness and 'pop' of an AMOLED panel.

What is extremely disappointing though is the fact that in the day and age of high resolution displays, Samsung has stuck a WXGA display in the J Max. The display reminds me of the original iPad Mini, with clearly visible pixels and jaggedness.

Otherwise, the display itself is not bad, with neutral colors, good viewing angles and adequate brightness levels, but the low resolution is very hard to ignore.

Of course due to the lack of an auto brightness sensor, you would have to manually increase the brightness every single time you go outside.

The only standout feature of the display is its sheer size, making it a good option for those looking for a device aimed solely at media consumption.

The device lacks some basics like the ambient light sensor, secondary noise cancelling microphone and haptic feedback, the exclusion of which, sadly have become Samsung mainstays.

It comes with a microSD card slot, which is thankfully separate from the dualSIM slots unlike the hybrid nonsense we are seeing in current smartphones.

8GB of internal storage is a big disappointment, especially considering how the device is marketed towards media consumption. The device comes with only 3.6GB of usable storage out of the box. With just our benchmarking applications, Facebook, WhatsApp and 3 games, the smartphone(tablet?) was left with just 1.4GB of internal storage.

Samsung is marketing the device as having a 1.5 GHz quad-core processor. To the layman, this sounds great, quad-core means good performance!

But no. The 32-bit Spreadtrum processor runs four Cortex A7 cores. The smartphone world stopped using Cortex A7 over two years ago. ARM announced the Cortex A7 back in 2012, and was seen in the first generation Snapdragon 200 and 400 processors.

In fact, all low end devices these days use the 64-Bit Cortex A53, which is much more modern and efficient than the obsolete A7.

The Galaxy J Max comes with the Mali-400 MP2 GPU, a dinosaur in today's day and age. Let's put things into context - Samsung used the same GPU in its Galaxy S2 smartphone in 2011.

Thus, the performance on the Galaxy J Max is sub-par and frustrating. The UI feels laggy, apps take a second or two extra to load, web browsing is frustrating. However, the camera is very snappy and simple games like Subway surfers and Candy Crush Saga play reasonably well.

The biggest negative when it comes to the software is the fact that the device comes with Android 5.1.1 Lollipop out of the box. When Android 7.0 Nougat is just around the corner, bundling an Android version which will soon be two generations old is not cool.

Samsung’s multi-window mode is also included, which allows you to run two separate applications at the same time. It is genuinely useful and has been refined over the years to a point where it has become the best multi-tasking solution around.

However, except for the multi-window mode, the software is just a stretched version of the OS found on the J series of devices, with applications like Contacts and S planner doing little to take advantage of the bigger screen real estate.

Samsung over the years has tried to de clutter and simplify TouchWiz, removing a lot of unnecessary and gimmicky features. But still, especially after using the Moto G4 Plus, TouchWiz seems a bit incoherent and messy.

The Samsung Galaxy J Max comes with a 8MP PDAF rear camera with a single LED flash and an aperture of f/1.9 along with a 2MP front shooter.

The rear camera is above average and produces decent results. In well-lit situations, images are sharp and vibrant with vivid colors. In low light situations however, the camera really struggles, with images lacking detailing and having a considerable amount of noise.

As with the On 7 Pro, the camera unit struggles with artificial light, with the exposure level all over the place. On a positive note, the camera application is a breeze to use and is very fast and snappy with the camera itself being quick to focus and process images.

The 2MP front camera is very mediocre, and seems like a relic from the past. It will do for emergency selfies, but that’s about it. It produces very grainy and muddy results.

Samsung has been able to pack a mammoth 4,000mAh battery in the Galaxy J Max thanks to its sheer size.

The battery life of the smartphone is actually one of its highlights and makes up for the rather middling internals. The smartphone easily makes it through a day of moderate to intensive use, with more than 30-40 percent of the battery remaining.

Samsung also has a rather nifty ultra-power saving mode, which applies a greyscale theme to your device.

8/8 Verdict - Neither Here Nor There

The J Max is very perplexing device. It is built well and is amongst the better looking Samsung budget handsets. The battery life is stellar and the display is great for content consumption.

However, the device suffers from an identity crisis. What is it exactly? Is it a smartphone with a humongous display or is it a 7-inch tablet that happens to also make calls?

Sadly, this identity crisis is what comes to define the device, as it doesn’t excel as a smartphone nor as a tablet.

The Xiaomi Mi Max, at Rs 14,999 offers a far better experience. It has a fullHD display, which is much better than the J Max’s middling WVGA offering, it looks and feels more like a smartphone and has much more modern and powerful internals.