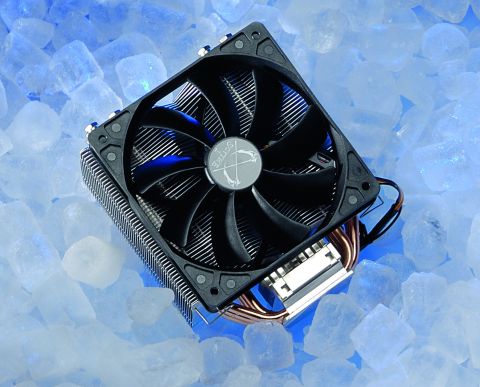 The aggressive-looking Yasya features a set of cooling fins that could have been designed to draw blood. It sits well along side other gothic-style rivals, such as Titan's Fenrir and Xigmatek's Thor's Hammer.

The Yasya has six 6mm heat pipes, rather than the more usual 8mm jobs in tower coolers this size, which is big. It only fits one way around, so can foul your RAM slots on crowed boards. If you've got heat spreaders on top of your sticks, it could all end in tears.

The Yasya fits all current flavours of AMD and Intel processors. It boasts of tool-free fitting, which introduces us to the horrible plastic push-pin fittings and no supporting backplate for you Intel boys.

These things are horrible. They break, aren't suitable for repeated removal, can't be adjusted and mean pressing down hard on your board. Aas you can probably tell, we don't like them much.

AMD fitting is much better, with the retaining clips pushing neatly into the side of the spreader.

The 12cm fan supplied can be fitted either side using wire clips. These are awkward things, and rubber mounts would have been welcomed.

The big bonus here is a backplate with a rotary fan control, enabling you to take control of the fan speed. It worked a treat and is either a welcome boon, or an unnecessary complication, depending on your outlook.

The Yasya performance ability trailed a little behind the other big tower coolers, such as Fenrir and Thor's Hammer.

At idle, it chilled our test system to a whisker over 44 degrees and at load it rose to 55.5 degrees under load. Decent, but nothing special for something this big. For the same money there are better, less dangerous, coolers.