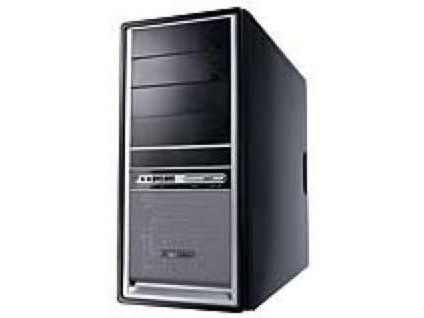 So, just when you thought the price of cases couldn't get any lower, Enermax has to stick its oar in and turn our metal boxed world upsidedown. It's amazing to think that this midi-tower is made on the other side of the world, shipped thousands of miles and can still be flogged to us, the public, for less than £40.

Another wonder is the quality of the finish. We remember buying budget cases a few years ago when the internal metal could be bent by a small child - not that you'd let them near it. Furthermore, because the metal had no finishing it was razor sharp. No such problems with the Enermax case. If anything, we're impressed by the exterior looks; it might be considered drab but we feel that there's a certain no-nonsense, functional air to it. There are even fold-down fascias for the top two 5.25-inch drive bays.

Inside the case we have good finishing on the metal with rounded edges giving it a solid feel. This model comes preinstalled with front and rear 120mm fans. These are Molex powered and have no speed controller, so one of those should be on your shopping list. The front also has a popout dust filter - a neat inclusion that gets the thumbs-up from us.

From the case side, fixtures are mostly quick-release; all the 5.25-inch bays and the two exterior 3.5-inch bays. The remaining four internal drive bays sit in a side-mounted, removable tray which isn't quick-release but it's not bad, either. Finally, we have the usual basic side duct, something we class under 'Better than nothing'. While the case doesn't ship with a PSU it does provide finishing and styling that's a notch above most budget offerings. Neil Mohr