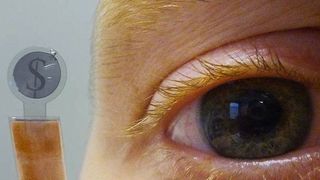 Then you might want to keep an eye on a new development announced last week from Ghent University's Centre of Microsystems Technology: a tiny curved LCD display that can be embedded into a contact lens and project messages.

To show off the tiny LCD, the team from the Belgium university displayed a dollar sign on the spherical surface, visible in the video below.

The prototype only has the graphical ability of a pocket calculator, and can only display very simple symbols at the moment.

Though it's limited for now, researchers have imagined a bright future for the technology - one with both medical and cosmetic applications.

The lens could darken to control the amount of light being transmitted to the retina for those with light sensitivity. Contacts with the tech could also be used to color the iris - perhaps setting off a future fashion trend.

The research team said the lenses won't replace "cinema screens for films," but the technology could eventually be used to create a heads-up display to guide users with road direction, or project text messages from smartphones.

However, those uses are still in the somewhat distant future and the lens still has a lot of development time before it's released to consumers.

Though LED contact lens displays have been around for some time, those lenses are limited to just a few small pixels on a very tiny area.

The Belgium development, on the other hand, uses the entire surface of the lens to display pixels.

One of the biggest hurdles for the team was getting the liquid crystal cells to form a curved sphere.

"The main challenge was to create a very thin, spherically curved substrate with active layers that could withstand the extreme molding processes," Jelle De Smet, head researcher for the project, said in a press release.

The team overcame that challenge by using new types of conductive polymers and then integrating those into a smooth spherical cell.

Getting people to actually stick these LCD lenses in their eyes might be another obstacle the team needs to overcome before this idea gets off the ground.