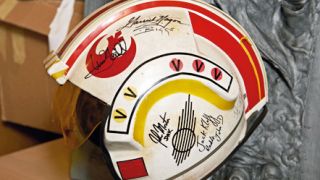 We're reliably informed that the Chewie growl is spelled "RUUUUUrhrGUGUGHRhghghghrRURURUghGHrrrrrr..."

If digital were a wookie it might well be making the Chewbacca growl right now, with the next Star Wars director JJ Abrams confirming what we already thought - that he'd be shooting Star Wars: The Force Awakens on film.

Given that George Lucas was a pioneer of next-gen film technology, Abrams' penchant for film was always going to cause some consternation.

But it appears the Star Trek and Lost man has got his way, clarifying that he would not even be going for the IMAX at the TCA press tour.

"The problem with IMAX is it's a very loud camera," Abrams explained. "It's a very unreliable camera. There's only so much film that can be in the camera. You can't really do intimate scenes with it. It's slow. They break down often.

"Having said that, they're working on digital versions of these, and so there may be a version one day that we would shoot on. But we're going to be shooting this next movie [Star Wars] on film."

Never mind Digital Chewie - Paramount is on your side...

More news bites, from a long time ago (the weekend), in a land far far away (Florida/San Fran):