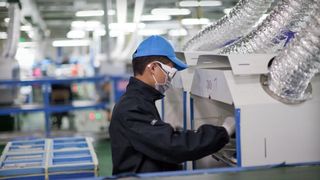 Soon to be replaced?

Your next iPhone could be made by robots.

That's because Taiwanese manufacturer Foxconn has reportedly started replacing workers on its assembly line with machines designed to do the same task.

Founder and chairman Terry Gou told employees of the plans at a dance in July 2011. According to Gou, using robots should improve efficiency and counter rising labour costs.

The 'Foxbots', as they're known, have started arriving in at least one factory, with another 20,000 due before the end of the year. They cost between $20,000 and $25,000 each to produce. That's around three times what the average Foxconn employee earns in a year.

Foxconn has a chequered history on working conditions. There have been reports of workers committing suicide, rioting, and striking.

It was investigated by the Fair Labor Association earlier in the year.

Recently, Gou admitted it was struggling to keep up with demand for the iPhone 5. Reports came of those on the factory floor being worked too long and without sufficient training to produce the 'tricky' new Apple handset. Between 3,000 and 4,000 workers were reported to have gone on strike from the factory, but Foxconn denied it. An employee riot in August forced the temporary closure of one Foxconn factory.

It also denied employees were made to work through a national holiday, saying those who chose to were paid extra, in keeping with China's employment laws.

After 16 workers were reported to have committed suicide at the Shenzhen plant, the company fitted nets to discourage anyone from jumping.

It's also rumoured to be planning a factory in the US.