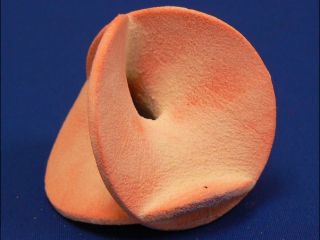 A team of engineers and artists working at the University of Washington has developed a way to create glass objects using a conventional 3D printer for the first time.

The team's method, which it named the Vitraglyphic process, is a follow-up to the lab's success last spring printing with ceramics.

3D printing in glass is expected to be used in architecture, as well as to create a whole new industry for artists.

Three-dimensional printers are used as a cheap, fast way to build prototype parts. In a typical powder-based 3D printing system, a thin layer of powder is spread over a platform and software directs an inkjet printer to deposit droplets of binder solution where needed. However, glass powder doesn't readily absorb liquid, so a new approach had to be developed.

By adjusting the ratio of powder to liquid the team found a way to build solid parts out of powdered glass. Their successful formulation held together and fused when heated to the required temperature.

Ronald Rael, an assistant professor of architecture at the University of California, Berkeley, has been working with the University of Washington to set up his own 3D printer. Rael is working on new kinds of ceramic bricks that can be used for evaporative cooling systems.

"3D printing in glass has huge potential for changing the thinking about applications of glass in architecture," Rael said. "Before now, there was no good method of rapid prototyping in glass, so testing designs was an expensive, time-consuming process."