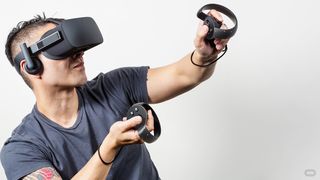 The Oculus Rift is almost here.

Update: Oculus VR founder Palmer Luckey has confirmed that anyone who pre-orders the Rift will get priority on the Touch controllers when they launch later in the year. "When you preorder Rift, you also reserve your spot for Touch preorders," he said. "First in line for Rift=First in line for Touch."

Ever since the Oculus Rift Kickstarter went live in August 2012 we've been waiting for the day when consumers would be able to order their very own, finished version of the virtual reality headset. And now that day is here.

Well, almost: pre-orders officially open this Wednesday, 6 January at 8am Pacific Time. That's 4pm if you're in the UK, midnight on 7 January in Perth and 3am for east coast Australians.

The news just broke, so we're not sure where in the world you'll be able to order a Rift from, what the price will be or when the final shipping date is. Oculus is promising these minor details are going to be revealed on Wednesday.

The games Lucky Tale and EVE: Valkyrie come bundled with the headset but what you won't get is a pair of Touch controllers: the innovative input devices have been pushed back to later this year while Oculus makes some tweaks to their design.