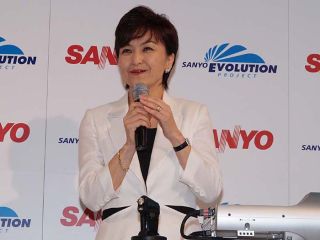 Sanyo's ex-chief Tomoyo Nonaka had been the first female boss of a major Japanese electronics firm.

Gender equality in Japan took an expected blow yesterday when the female head of Sanyo , Tomoyo Nonaka, resigned from the company citing the now-ubiquitous 'personal reasons'.

Nonaka had been in charge - first as CEO, then as chair - from June 2005, when she became the first woman to run a major-league Japanese electronics firm. Japan's notoriously conservative society is generally considered to extend to its businesses and the lack of opportunity therein for women to advance.

Although Sanyo's brief official statement on her departure reads simply "Chairperson Tomoyo Nonaka has turned in her letter of resignation" rumours about false accounting and board-level disagreements are widely considered to have played a part.

Sanyo said recently that it may need to revise four years of financial results after a local newspaper reported that more than $1 billion (£515 million) in losses may have been overlooked. Fiscal regulators in Japan are readying an investigation into the matter.

The resulting boardroom objections to Nonaka's plans for an internal investigation and a share price that has fallen by a third since she took over all appear to have influenced the outcome as Sanyo looks to make its way back from an imminent third consecutive annual loss.