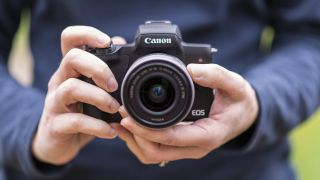 With a number of new mirrorless systems and individual cameras introduced in the past year or so, the market share of the big players has been in a constant state of change – and the latest report from Japanese analyst firm BCNRetail lays out exactly how each company is currently faring.

The report, which details camera sales and market share in June based on data from major home appliance stores and online retailers, shows Sony to have almost caught up with market leader Canon, with a steady increase in market share with each week of the month.

Olympus is in third place while Panasonic is in fourth, the latter having done well to increase its share in recent months. The report doesn't show Nikon to have placed, which may seem surprising, although inspecting the list of the biggest-selling cameras shines light on why all of this is the case.

With the exception of the Sony A7 III, every camera in the top 10 list either is either based around an APS-C or Four Thirds sensor. With so many entry-level and upper-entry-level models making up the market, Nikon's absence isn't entirely unexpected.

After all, with its 1 system now retired and its cheapest mirrorless camera being the full-frame Nikon Z6, the company doesn't currently offer an entry-level mirrorless option. It does, however, continue to offer a number of junior-level DSLRs, such as the D3500 and D5300.

The EOS Kiss M, also known as the EOS M50 outside of Japan, is in first place, with a share of 16.9% throughout June, and it's joined by the company's EOS M100 in fourth place. Sony's A6400, which is one of the newest models in the list, is a close second, with the A7 III and A6000 in seventh and ninth place respectively.

Olympus's PEN E-PL8, E-PL9 and OM-D E-M10 Mark III all make the top 10 too, along with Panasonic's GF10 and GF9. Panasonic recently released two new full-frame models, the S1 and S1R, with a third S1H on the way.

The news that the mirrorless sector has kept relatively steady at 98.4% year-on-year is somewhat welcome to hear, particularly following a report released in June revealed the market overall was continuing to suffer. This most recent report ends on an upbeat note, however, citing the recently announced Sigma FP and Sony A7R IV as two new models that may help the sector to grow in the second half of the year.