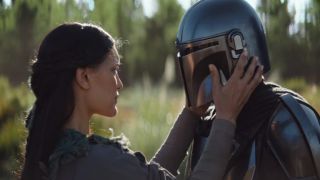 The first trailer for the Disney Plus-exclusive Star Wars series The Mandalorian blew us away when it landed back in August, showing-off movie-quality cinematography and an epic, galaxy-spanning scope.

Now, a new trailer has arrived for the live-action television series – and it somehow dials up the action and spectacle even further.

The trailer features a hypnotic voiceover from the unmistakable German filmmaker/occasional actor/full-time curmudgeon Werner Herzog, and begins by questioning the role of a bounty hunter in a post-revolution world, while also offering some insight into the titular character's mysterious backstory.

Of course, the philosophizing quickly takes a back seat to some incredible looking action set-pieces, including shootouts, dogfights and hand-to-hand fight scenes.

A man of few words

We see The Mandalorian (Pedro Pascal of Narcos fame) as he takes out storm troopers, ropes bounties, catches huge beasts and meets up with what appear to be some old allies (including Gina Carano's Cara Dune and Taika Waititi's IG-11 droid).

And while don't get to see him with his helmet off, the new trailer does let us hear The Mandalorian's voice for the first time, even if it is only a couple of (rather badass) words.

The first episode of The Mandalorian lands on Disney Plus on November 12, 2019, with remaining episodes arriving each week after that. You can check out the new trailer in full below.