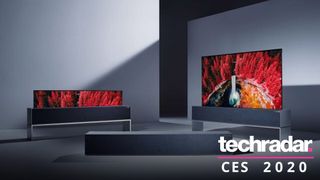 Last year, the LG Signature Series OLED TV R made some big waves at CES and, at the time, was expected to launch later that year - and yet, when the time came to start shipping the TV to retailers in the middle of last year, it was nowhere to be seen.

It was interesting, then, to see that LG brought the R9 Series with it to this year’s show with the new ability to unfurl from the ceiling, and even more interesting to hear from the company’s Senior VP of Communications, Tim Alessi, that the TV will be available later this year.

According to Alessi, the TV has been updated with the TV maker’s new Alpha A9 III chip like its newly introduced siblings - the 2020 LG OLED CX, EX, GX and WX Series - but he says that the TV is unlikely to include the ATSC 3.0 Tuner needed to one day receive 4K and HDR over-the-air broadcasts.

As for the final price and exact release date, Alessi says that’s to be determined, but CNET reports that it's likely to be $60,000 (up to £38,000, AU$72,000) according to a conversation they had with JS Lee, head of global marketing for LG's home entertainment business.

When asked, Alessi wasn’t able to narrow down the numbers, but says that LG will have more to share on that front later this year.

Of course, if you're paying for a $50,000 TV you probably want something a bit fancier than a floor-standing OLED. That's why LG is touting its ability to mount the TV to the ceiling and have it unfurl from above.

LG Display, the engineering team behind the OLED, said that last year's model actually technically wouldn't be able to unfurl from the ceiling because of limitations with the rolling mechanism, but has said that those issues have been fixed for 2020.

Expect to see numerous pictures and videos of the TV from CES 2020, which officially opens to the public on Tuesday, January 7.