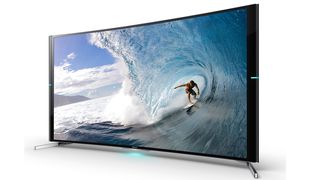 Not to be left out of the fun, Sony has just announced its own curved TV debut, the Bravia S90, ahead of the IFA 2014 trade show.

The TV come in 65-inch and 75-inch versions, and arrives with 4K Ultra HD resolution and curved design that hopes to give you a bit more immersion for your money.

Unlike Samsung's Bendable TV, Sony's is fixed in its curvy shape, so you'd better be certain that curved is the way you want to go before paying out.

In terms of other specs, the S90 is similar to the KD-65X9005B 4K TV, but adds Sony's 4.2 channel multi-angle live speaker system for the first time. Meanwhile the X-Reality Pro engine will upscale regular broadcasts to 4K.

Sony says its Multi-angle Live Speaker system will offer "expansive, uncompromised 360-degree surround sound", but we'll wait until our review to see if it's as good as it sounds.