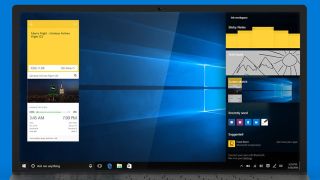 Microsoft has acknowledged that there's an issue with the Windows 10 Anniversary Update causing some PCs to freeze up in one respect or another, and the company has offered some details on the problem, with a patch incoming hopefully fairly soon.

If you missed this one, some of those who installed the major update for Windows 10 have found their system freezing up – either the whole thing locking up, or some elements such as the taskbar or task manager.

In a thread on Microsoft's Answers forum, the company explained that this problem is affecting those with the operating system installed on an SSD, with apps and data stored on a separate drive.

That's not surprising, seeing as last week when this issue first popped up, some users noted they had some success by using the workaround of changing the app install location (which is in Settings, System, Storage, then look under Save locations) back to the system drive (i.e. the drive with the OS installed).

And while the company works on a proper fix, Microsoft is making a similar suggestion, with the company stating: "In the meantime, you can work around this issue by signing into Windows 10 using Safe Mode [the freezing issue doesn't occur in Safe Mode] to move your apps and data to the same drive as your operating system."

Or, if this doesn't work, Redmond further advises that you should rollback to uninstall the Anniversary Update. There are two methods of doing that, one of which is to use the Recovery Console (restart your machine – then when you get to the sign-in screen, hold down the shift key while selecting Power > Restart, then after rebooting to the 'choose an option' screen, select Troubleshoot > Advanced Options > Go back to the previous build).

Those who can't see the option to revert to the previous build should use the Settings app in Safe Mode to roll back, a slightly lengthier process – check out the instructions Microsoft details here.

Meanwhile, some Windows 10 users posting on the forum have complained that they're still affected by this freezing issue even though they don't have an SSD, or indeed they don't have their apps installed on a different drive to the OS.

So this may be a thornier problem than Redmond seems to believe. At any rate, as we already mentioned, with any luck a patch will be along soon enough, and it'll work for all and sundry – here's hoping, anyway…