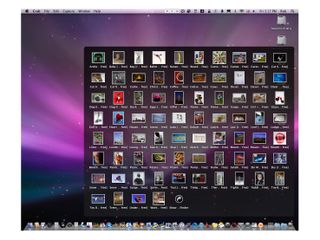 Mac OS X 10.5 Leopard could get a massive update on Friday - including a user-friendly List view for Stacks. Many Mac users have complained that the current Fan and Grid views (the latter shown here) are too limited to be truly useful

Apple is set to unleash its biggest ever point release update to the Mac OS X - and it could arrive as soon as Friday. The Mac OS X 10.5.2 update is said to weigh in at around 400MB and will enable you to turn off the much-derided translucent menu bar. It also includes many other requested features and bug fixes.

These include the addition of a List view to Stacks, CD / DVD sharing and support for wireless backups using a networked drive attached to an Apple AirPort Extreme.

This should help salve the mental sting AirPort Extreme buyers felt when Apple announced Time Capsule at Macworld 2008, a combined wireless base station and backup drive that costs between £199 and £329.

Many Mac fans picked up AirPort Extreme drives last autumn because wireless backups were promised by Apple in its initial promotional material for Mac OS X 10.5 Leopard. However the feature had mysteriously disappeared by the time Leopard launched last October - and then TimeCapsule appeared. Harumph.

The latest Leopard seed - 9C20 - contains no known issues, MacRumors says. The biggest difference between it and its 9C16 predecessor is that Apple has now pulled graphics card updates into a separate installer, called - funnily enough - Leopard Graphics Update.

Looks like we could be in for a 'fun' weekend.