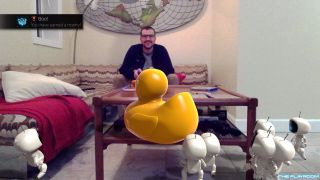 Watch livestreams of gamers gaming at home...while not at home

Sony updated its mobile PlayStation app for Android and iOS with a new feature to watch livestreams from PS4 gamers while on the go.

The new addition comes labeled as the "Live from PlayStation" section, letting users browse game streams from their devices. Actually watching livestreams, however, will kick the video over to open in separate applications.

Specifically Ustream feeds open in the service's own application, while Twitch.tv streams play through a mobile device browser.

Just below the video window, there's also now added support video playback from PS Store notifications in the What's New pane. This list will propagate with live game sessions from friends to get to watching their streams faster.

Along with the new live video support, the app fixes a niggling issue of waking up the main system every time users want to do something. Now the app allows mobile devices to queue up downloads or accept friend requests.

With the new update, the PlayStation app is starting to catch up fast with the SmartGlass app Microsoft introduced during the Xbox 360 days.

The update is rolling out to a wide variety of devices around the world right now for both Android and iOS platforms.