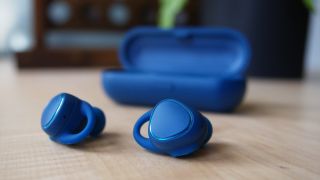 The company claims that the Gear IconX (2018) brings several new upgrades and features. It comes with standalone music playback and 4GB of inbuilt memory. Music on the earbuds can be loaded either form a smartphone/PC using USB or wirelessly. Its touch based gestures allow users to play, pause, skip and an option to scroll through your music library.

It has got more features like Ambient Sound function, which allows users to choose the amount of noise they would like to let in while listening to music. Users get to choose and adjust the audio frequency from five presets—Bass Boost, Soft, Dynamic, Clear and Treble Boost—using the equaliser option.

Samsung claims the battery life on the earbuds is much improved from the first attempt. We found the original earbuds to offer awful battery when playing back music, with them lasting just around 90 minutes, while these new earbuds will apparently last for up to five hours.

If you’re talking on the phone that’s going to be closer to four hours according to Samsung. But there’s new quick charge technology in the charging case that should give you an hour's battery in the earbuds from only 10 minutes inside the case.

Samsung has also built-in support for your preferred voice assistant, so if you’re using the Galaxy S8, S8 Plus or Note 8 you’ll be able to use Bixby, or if not you can either use Siri or Google Assistant on another device.

Fitness-wise the Icon X 2018 comes with auto activity tracking and a personal running coach feature, but this is largely the same as we’ve seen before from Samsung.

The Gear Icon X 2018 is available at Rs. 13,990 via retail outlets, Samsung Online Shop, as well as Flipkart. Sale for he Gear IconX has kicked off from July 26 in India.