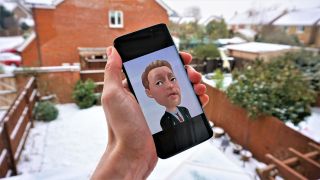 When we reviewed the Samsung Galaxy S9, we got tired of its augmented reality emoji pretty quickly. It was an obvious reaction to Apple's Animoji, but not as well implemented and with little practical use.

We may soon have a change of heart though, because Samsung has come up with a practical use for the little 3D cartoons that look roughly like you. The company has received a patent for "hybrid visual communications", which involves using a 3D model of your face (an AR emoji) for the call rather than a live video feed.

The emoji would respond to your facial expressions, but only parts of the model would need to be transmitted, using less bandwidth than a regular video call. This could be very useful in areas with flaky connections, and give you the option of hiding if you're not looking your best.

Both the sending and receiving devices would need to be capable of generating 3D images, so it might be something that arrives with the Galaxy S10, which is rumored to have a 3D camera.

This is only a patent for now, and it might never find its way onto your phone, but the idea sounds good – and it would be much more useful than an animated GIF.