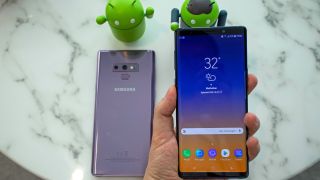 We're almost totally confident the Samsung Galaxy Note 10 will have three cameras, and the Galaxy Note 10 Plus will have five. We've heard this multiple times before, and more leaked images of the handsets reinforce the rumor.

While it's impossible to know for certain what specs a phone will pack before it launches, the sheer volume of Galaxy Note 10 leaks all saying (and showing) the same thing are hard to ignore.

Posted for all to see on Slashleaks, this is a trio of images claiming to show the Note 10 and Note 10 Plus (or Note 10 Pro, we're not sure of the name yet) next to each other, with all their visual differences on display.

The photos show the rear of the Galaxy Note 10; the major difference, (other than the obvious size inequality) is that the base Note 10 has three rear cameras and a flash module, while the plus-sized device has five snappers and the flash.

We don't know much about these rear sensors yet (other than the flash, no prizes for guessing what that does), but we're expecting to see a main sensor, a telephoto and ultra-wide angle lens on two more of the cameras, then perhaps a macro or Time-of-Flight (ToF) sensor for close-up and portrait shots respectively.

One thing worth pointing out is that the smartphone has physical buttons, seemingly shutting down early rumors of capacitive buttons.

We've already seen photos comparing the Galaxy Note 10 with its larger sibling, so nothing shown in the new leaked images is a big surprise, although these certainly are higher quality snaps than we've seen before.

In fact, at this point almost every inch of the Galaxy Note 10 has been rumored, leaked, and discussed in intense detail, so when the handset launches on August 7, it's highly unlikely Samsung is going to be able to surprise us with anything.

Stay tuned to TechRadar, though, just in case the company has something up its sleeves.