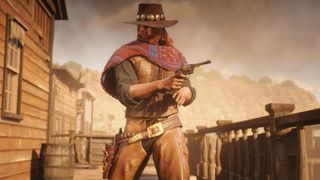 You may recall that when Rockstar tweeted its apology for the various issues that have plagued the PC version of Red Dead Redemption 2 – including the dreaded stuttering – a complimentary care package was promised to anyone who had played from launch “through to the holiday season”.

Well, that bonus bundle of free stuff for Red Dead Online is now available to PC gamers, as Rockstar made clear in a blog post, while also announcing that it believes “the vast majority of performance issues for Red Dead Redemption 2 on PC have now been resolved”. And that any remaining lingering issues will be tackled going forward.

So what exactly do you get? Rockstar notes that players will receive the Prieto Poncho, along with the aforementioned care package to help you better survive in the online mode, which consists of the following:

Loot in your Lock Box

Those who are already playing Red Dead Online and have an existing character should have the care package now, and will just need to pick it up from their Camp Lock Box or any post office.

Folks new to Red Dead Online will get the package within 24 hours of creating a character.

A couple more gifts are also in the pipeline for all denizens of Red Dead Online, namely a variant of the Marino Bandolier, along with a new off-hand holster and an additional care package. This little lot will arrive with the next major update for RDO.

Earlier this week, we found out the date upon which Red Dead Redemption 2 will land on Steam, and that’s happening very shortly – on December 5 to be precise, which is exactly a month on from the initial release of the game on PC.