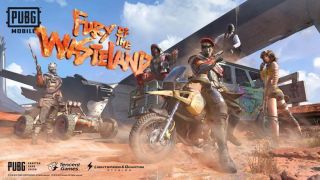 The new 0.15.5 update is set to hit the popular battle royale title PUBG Mobile in just a few hours from now. Ahead of the latest version going live, game developers have released the official patch notes for the update, highlighting the headlining features such as a new map, weapons, and a new vehicle.

PUBG Mobile 0.15.5 update will roughly take 210 MB on Android and 240 MB on iOS devices. Moreover, Tencent will not be taking down the servers for maintenance even though the update adds more enhancements and upgrades to the game.

The latest version of the famous battle royale title introduces Royale Pass Season 10, which is themed "The Fury of the Wasteland." Players will be offered new desert-themed weapons, vehicles, and skins as they progress through the tenth Royale Pass Season. Those who purchase the Royale Pass will also be rewarded with additional items and exclusive desert-themed skins.

PUBG Mobile devs have added a new Ruins map for Team Deathmatch Mode, which is essentially a rainforest with dense vegetation surrounding the ruins from the Sanhok map. Players will respawn at random locations in this new map, making it an exciting gameplay style.

The new update brings the MP5K submachine gun exclusive to the Vikendi map. It fires 9mm ammunition rounds at 900 RPM and has a hit damage rate of 33. The MP5K can be equipped with various attachments, including tactical stock, magazines, scopes, and laser sights.

PUBG Mobile 0.15.5 also brings in a new vehicle, Zima, which is exclusive to Vikendi. It is an off-road vehicle that specializes in snowy terrains of Vikendi. It has a top speed of 115 km/h with a seating capacity of four and replaces UAZ on the map.

The latest version of PUBG Mobile brings the much-teased companion system to the gameplay with the Falcon. Players will be able to take their flacon to the battlefield and can even collect materials and companion shards to redeem it.

The devs have also added a new character to the game. Sara is a vehicle engineer, and she can reduce vehicle damage when driving or riding any vehicle in the EVO modes.