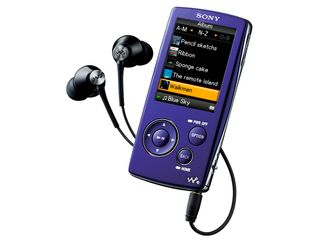 The Walkman video MP3 player is available in three memory sizes: 2GB, 4GB and 8GB; and there are four colour options: violet, black, white and pink.

Sony has finally caught on to the trend of video-enabled digital music players with today's release of its Walkman video MP3 player.

A member in its new NW-A800 series , the Sony Walkman NW-A808 sports a 2-inch screen (yep, smaller than the Apple iPod and the Creative Zen Vision:M ) with a 320 x 240 resolution. Videos can be viewed either horizontally or vertically, Sony said.

The Sony Walkman NW-A800 players are less than one centimetre thick and support the MPEG-4 and AVC video codecs.

Sony said the battery will provide 30 hours' music playback and eight hours of video from a single charge. The NW-A800 series supports Sony's Atrac format, as well as MP3 and WMA (without DRM) and will be available in three sizes, with each coming in four colour options.

Music and video tracks can be bought from Sony's Connect online store.