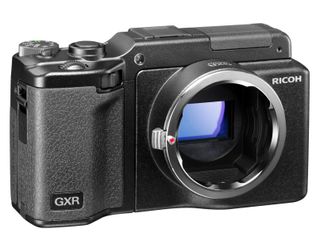 Ricoh has announced a new unit for its GXR compact system camera which is capable of accepting Leica M mount lenses, as well as other brands when used with an adapter.

The GXR system was introduced in 2009 and it comprises a back with the controls and LCD screen, and a separate, interchangeable camera unit. This camera unit is made up of a lens, sensor and image processor.

The new GXR MOUNT A12 doesn't have a lens, instead it has a lens mount.

Featuring an APS-C size CMOS sensor and newly developed focal plane shutter, the GXR MOUNT A12 makes it possible to mount Leica M lenses and provides a variety of compensation and correction functions.

Other lenses can be used with the unit if a conversion adapter is used. A checking device is included for confirming whether or not other lenses are physically compatible with the unit.

The GXR MOUNT A12 is capable of independently correcting colouring at the corners of a frame. Colour shading correction is also possible, along with peripheral illumination correction.

A distortion correction function is also on board, with photographers able to set the correction to "strong," "medium", or "weak".

To help with accurate manual focusing, a focus-assist function is also included. Users can select from two modes and check the focus by strengthening outlines and contrast.

Magnifying the image on the back of the screen while shooting can be done throughout the image, and quality of the image at 4x and 8x magnification has been enhanced.

Two shutter methods can be used with the unit. First a newly developed focal plane shutter, which can achieve shutter speeds of 1/4000 sec to 180 seconds. An electronic shutter can shoot from 1/8000sec to 1 sec.

The GXR MOUNT A12 unit will be available from September 9, 2011. Price is yet to be confirmed.